This week I started on the retopology of my head model.  I’m a whole week behind because of work commitments and a busy weekend.  So I’ve taken Sunday to catch up 1 week.  The plan is to make time at work for the 3rd week and get 2 blog post done by Friday.

I haven’t had much practice at this in the past.  It’s something that is done by the character artist before delivery to the Animation department.  It’s usually a two way process until the edge flow is indicative to good deformation.  The general rules for retopology are:

Obviously character design will dictate some of the major loops in the face, they just have to be there to hold the form of the character.  But what looks good in a still pose, doesn’t always hold true when it moves.

At first I used Maya retopology tools that are bundled into the modelling toolkit.  They are quite good and easy enough to get going.  I did have to mess about with the shaders to get a nice readable surface to work with.  I found the edge extend methods were the best way to me to block down the loops.  Either extending a single edge or a complete loop.  The smooth tool was also very good and essential to getting a decent polygon spacing.

Once I’d fleshed out the entire head minus the ear, I brought in the ear from the Zbrush obj export.   I quickly reduced the ear with Maya reduction tools then massaged the loops to match the vertices I had in the ear space on the head.  It wasn’t tricky, but I did think that time permitting I would have liked to model a better ear for this character.  Ears won’t be essential to his personality so I think I’ll get away 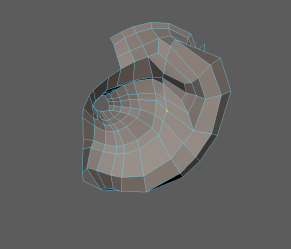 Once the ear was stitched into the model, I moved onto good old fashioned poly modelling.  The tweak mode in Maya is really good for this and has improved a lot over the last few years.  So much so I didn’t want to move to Modo or Softimage for this stage.  The introduction of Mudbox sculpting into Maya was a missive help as well.   It just worked.  I only wish it worked with a “live surface” so I could slide the points around.  While doing this I was occasionally rendering the character to asset the final look.  It’s important in the refinement stage to keep an eye out for any unforeseen issues.  While I’m talking about rendering,  I’ll also mention my camera settings.  In traditional photography you’d take a portrait photo with a 80mm or 100mm lens.  It stops the proportions of the face from becoming distorted.  I set up my camera while modelling to a 100mm focal length in Maya.  It makes all the difference and really helps me with form, shape and silhouette.

The final phase was the mouth sock.  I generally model characters with a closed mouth.  So I used the sculpting tools to ease open the mouth.  I experimented with skinning the jaw to open the mouth to give me room to model the inside.  It was working well but then Maya crashed!  That set me back to before the opening of the jaw.  For round two I just extended the edges to form the inside of the mouth.  I 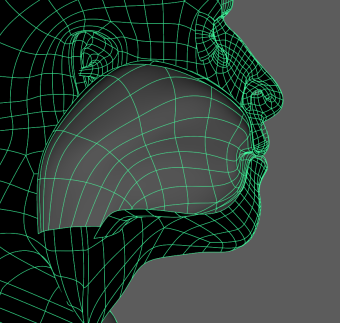 t’s tedious and something you wouldn’t do time and again in production.  You’d start from a base mesh that you’d form into your new character.  However this is for self growth and all that jazz, so a little pain is required for your art.

The next step is to build the teeth.  Well time was well and truly running out so I brought in the teeth from the model provided on the course.  I think it’s important to get the correct placement within the mouth.  Making sure the lips rest naturally on the teeth and gums. 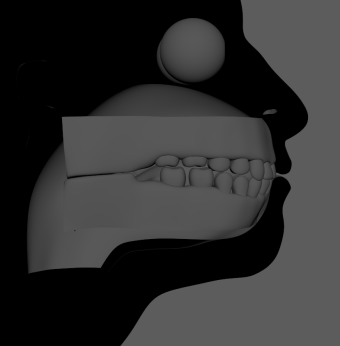 Finally I quickly wanted to get some hair onto the character.  A quick sculpt and I got this.  It needs work but I want to try XGen rather than poly hair.  So this is just a placeholder.

It’s been a while since I’ve done anything serious in a 3d program.  Most of my time over the last few years has been developing 3d pipelines for games content creation,  optimising work flow and reducing headaches for the 3d artists.  So I’ve enrolled on a course for the 1st time since university.  Thankfully FreestyleGames is a great place to work so they have paid for it.  I have a background in rigging and animation so the course is all about 3d facial rigging.

The 1st week was a gentle introduction by the instructor  Wade Ryer.  He’s a very experienced rigger who has worked on some impressive film titles at AAA studios.  So I’m looking forward to his up and coming lectures.

This little concept sketch was done on a Sunday afternoon.  The next week is about topology so I’m going to wait for the next lecture before Retopologizing the model and finalising the neutral pose.

The key point raised in the first week.  All expressive humanoid characters should be able to reach these key poses, and effectively communicate them to the audience.

Retopologizing is basically the process of taking a high resolution mesh, typically one that has been sculpted in an application like ZBrush or Mudbox and re-created with the basic shape still there, only a lower resolution.